POPS forms a new partnership with TV Tokyo to Bring the Complete Naruto Anime Series to Vietnam Audiences across the POPS Platform.
Menu 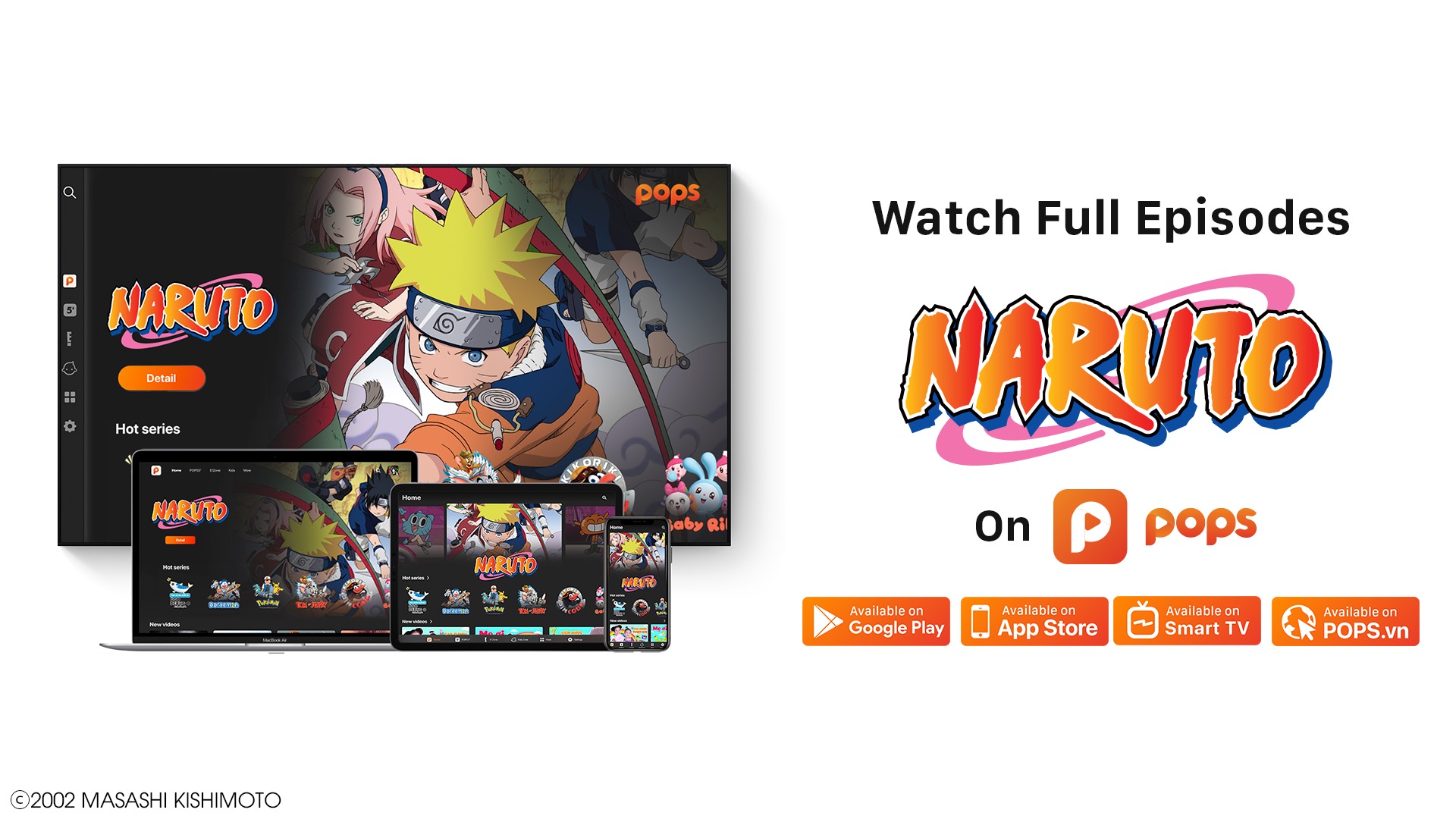 POPS forms a new partnership with TV Tokyo to Bring the Complete Naruto Anime Series to Vietnam Audiences across the POPS Platform.

POPS has released many highly beloved anime series onto the platform in 2020 and the platform will soon add the complete Naruto and Naruto Shippuden series with exclusive new dubbing for Vietnamese audiences.

For the first time, Vietnamese audiences will be able to enjoy the adventures, and occasional misadventures of hero Naruto with the region’s best production house in the business bringing both high-quality imagery and Vietnamese voice-over to the public.

Naruto is the story about Naruto Uzumaki,  a young ninja eager to fulfill his dreams of becoming the Hokage – the leader of the Konohagakure’s village. The first part of the story, titled simply ‘Naruto’ highlights his pre-teen years while ‘Naruto Shippuden’ focuses on his quest as a teen. Both series touch on different tones and themes to highlight the hero’s journey and since their release, both have been so popular that they air weekly around the world in multiple languages to this day.

The Naruto manga was first serialized in the Weekly Shonen Jump magazine in 1999 and ran to 2014. The complete series is available in 72 volumes, and the global circulation of the series has reached more than 97 million copies.

In March 2017, Naruto Shippuden, and 11 theatrical animated features were also released in Japan. The series has led to tons of popular merchandise including apps, games, and even exhibitions, musicals, music festivals, and Kabuki.

Now, over a decade since their English dubbing for Western audiences, POPS is set to release the series for the enjoyment of Vietnamese audiences in a similar fashion.

This is all possible thanks to a cooperation with TV Tokyo. All 220 anime Naruto episodes as well as all 500 Naruto Shippuden anime episodes are now under POPS copyright. The Naruto anime series will officially start airing on December 5, 2020 on both POPS App and POPS Anime channel, with the release date for Naruto Shippuden still to be announced.

POPS Vietnam Country Manager, Mr. Fabien Lotz said, “The cooperation with TV TOKYO is based on 2 principles, bringing more Japanese anime to fans across Southeast Asia and fighting piracy in the process. We hope that with the combined power of our brands, Naruto’s fan base will continue to grow to new heights through legitimate channels.”

This release marks the beginning of a great and potentially long-lasting partnership between the media titans POPS Worldwide and TV Tokyo with POPS also recently buying the copyrights for three of TV Tokyo’s other popular series.

To be released in December 2020 and early 2021, on both POPS App and POPS Anime channel are the classics, Sergeant Keroro, My Guardian Characters, and Carino Coni.

Featured content, both exclusive and through partnerships with renowned studios like TV Tokyo will continue to bring joy to POPS audiences. The ever-expanding library of premium and curated entertainment for the entire family will continue to grow and POPS will be sure to keep its fans updated of all upcoming releases.

POPS is an entertainment brand creating new experiences every day to drive culture. POPS offers the largest library of POPS originals, local and international content for our fans and this allows us to create an entertainment platform for a personalized experience. With over 12 years in entertainment, POPS platform is fully positioned to capture the attention of today and tomorrow’s fans in SEA. With strong relationships with top artists, creators and the biggest storytellers from all over the world, POPS brings a unique entertainment experience through POPS Original series, long and mid form content, concerts, events, shows, festivals, movies and more.

Previous
POPS forms a new partnership with TV Tokyo to Bring the Complete Naruto Anime Series to Vietnam Audiences across the POPS Platform.